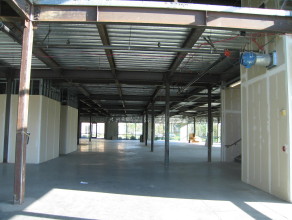 Created with the idea of attracting tenants to a 25,000 square foot office building that had been unoccupied for ten years, the build-out resulted in the signing of a new tenant lease within weeks of completion and 90 percent building occupancy within two years. The lobby connects visually to the second floor elevator lobby, which allows for spectacular views of San Francisco Bay from that level. A building conference room was also included adjacent to the lobby.

We provide a personal, hands-on approach to the design process, where our office leadership can be intimately involved from the beginning to the end of a commercial or residential project.
Get in Touch | 510.479.3434
Copyright © 2022 Lawrence Rugg Architecture. All Rights Reserved.
×
Search